How Far Along: 30w 6 days ,64 days to go :)
Size of Baby: Baby Should weigh about 1.5 kg and be about 37cm long
doctor did a scan today to check and our little one clocked in at 1,8kg (1.797kg to be exact).
WOWZA
She's meant to double that between now and the time she arrives
Picture of Baby:

Baby is the length of a cucumber 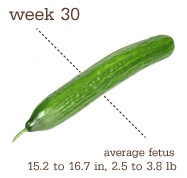 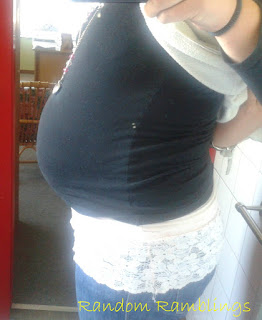 Sleep:my 'belly pillow' is causing the hubster some frustration (especially now that its colder at night and we can actually be near each other without overheating) . He complains its taking up too much space but it still didn't stop me from waking up in the middle of the night and finding his face on my pillow ;) (so I'm calling his bluff)
Best Moment of the Week: Seeing little one again and almost being finished with the nursery :) Its coming together beautifully! check out the latest progress here
Movement: All the time!! :) I'm loving it :) It was also nice to see how she was laying today in the scan so I can identify what part of the body is moving where:)

Symptoms: the usual :)
Food Cravings: these have died down again... now I'm just hungry... ALL.THE.TIME!! weight seems to be holding fairly steady though so I'm obviously not eating as much as I feel like I am
What I Miss: the time when getting dressed in the morning was easy! Even some of my maternity clothes are starting to flake on me :(
What I'm Looking Forward to: Tourism Expo tonight and hopefully painting furniture this weekend (we'll see how that turns out ;) )

For those who are new you can check out Part 1 and 2 of our Nursery coming together Here and Here.
I was off sick the last few days from work and was instructed to rest so I spent most of my time on the couch. When I started feeling better I got a jump start on some of the crafts I could do for the nursery while still on the couch.
When we still thought little Sprinkle was a boy we were going to do orange and aqua as our nursery theme. My mom got me a huge stack of orange material cheaply from a factory shop and it had been sitting in the cupboard waiting for me to get inspired. I decided to use some of it to make a crib skirt so I measured it out so it would fit around our crib and cut (With my pinking shears again as an easy way out as I don't have an overlocker) 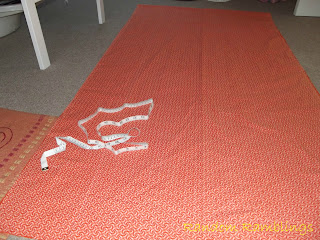 I hemmed the bottom edge to give it a nice finished look. 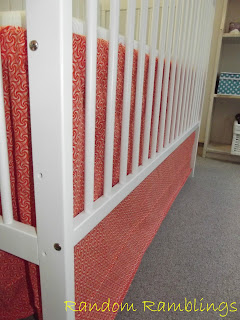 and then used my trusty staple gun to attach it to the crib :) When I need to shorten it I can just pull the staples out with some pliers and repeat the process 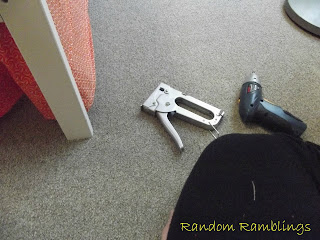 Now the things stashed under the crib are hidden away :) 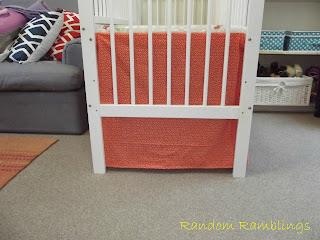 The whole process took about 25 minute start to finish. Now granted its not the most professional job or most complicated of patterns but I've been putting it off for months and now I could just kick myself cos it was so easy and quick.
I also mentioned in my last post we were going with a loose theme of pinwheels in the space. When googling/checking pinterest for ideas i came across this nursery by View Along the Way and fell in love

Source
Her pinwheels actually spin!! I loved the idea and set about to recreate it (somewhat) in our space.
I had some pre-cut square paper from a paper pad I was given that happened to be in the right colours so I started snipping away. For those unfamiliar with the process you cut from each corner towards the middle of the square. Be sure to leave a gap between the end of your cut and your centre point to allow you to have something to connect your pinwheel too. I cut small holes into the corners to allow my splitpin to go through the paper . 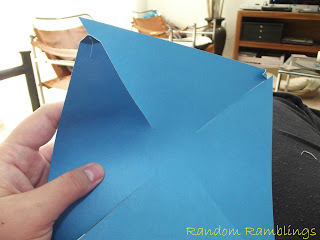 Fold alternate points to the centre and secure 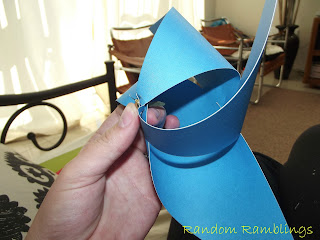 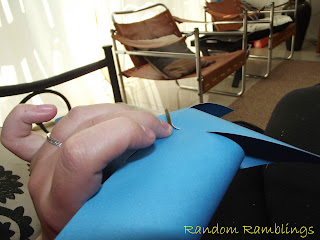 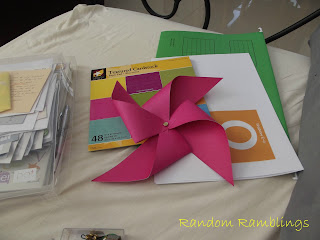 I didn't want to go over board so I started with a few big ones. 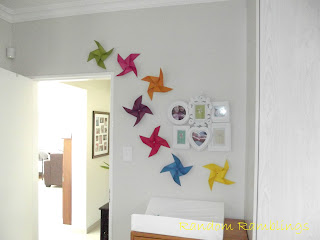 It looked a bit sparse so after some Whatsapp consultation's I decided to make some smaller ones too.To say I'm pleased with the outcome would be an understatement!!
I LOVE IT!!! 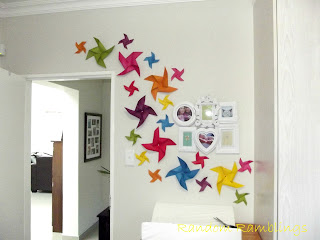 It adds so much fun to that side of the room :) Lets hope Sprinkle enjoy's them too :)

How Far Along: 29w 6 days , I'm on time today even though I almost didn't get to posting :)
Size of Baby:   Baby Should weigh about 1.3 kg and be about 36cm long
Going to the doctor next week so will hopefully get a more accurate number
Picture of Baby: 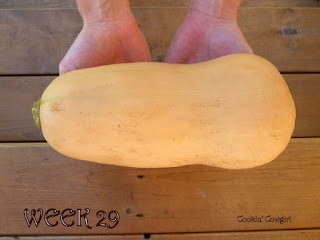 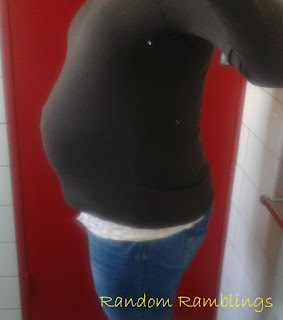 Sleep:hit or miss... when I sleep I sleep Hard but its been very interrupted and Restless. Also being woken up by heartburn/toilet breaks doesn't help
Best Moment of the Week: its Friday!! that's all I'm saying ;)
Movement: All the time!! :) I'm loving it :)
Symptoms: the usual :)
Food Cravings: Still sweet things :)

What I Miss: a normal range of movement. Drivings becoming interesting, So is trying to tie my shoelaces
What I'm Looking Forward to:Weekend!!

On a side note I found the Ante-Natal classes hilarious especially the one where partners were included. To see the Men's faces when the midwife started talking about breastfeeding and checking your nipples,I had to try very hard to contain my laughter ;)

When I last left off in Nursery land we had just got the Cot up and were in the process of moving in :) 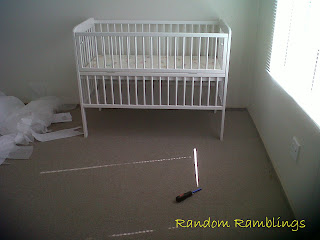 You can read all about that here .
We've made some significant progress in the decor department and things are looking a bit more 'filled up' and baby friendly in there. We're going for a loose theme of pinwheels but its more along the lines of decorating with specific colours than getting to 'themey'. 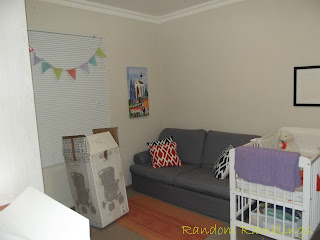 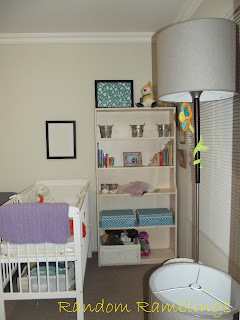 We still haven't painted the Furniture like I mentioned in the previous post (life has gotten in the way) and the second lampshade you see in the picture on the right (and the unseen black crate of books underneath it) will be moving out of the room this weekend once our new bookshelf arrives !! We're also going to put the pram together this weekend so the box will also leave :). The couch is the sleeper couch that I recovered, as we only stay in a two bedroom so we can't forgo the extra sleeping space as we often have visitors.The Blank Frame above the Cot will hold some Name art that will be put in when we reveal her name after she arrives :)
Today I want to share about my favourite new addition to the Decor and (in my opinion) one of the quickest,easiest and cutest ways to spruce up boring blind's.
The Bunting:) 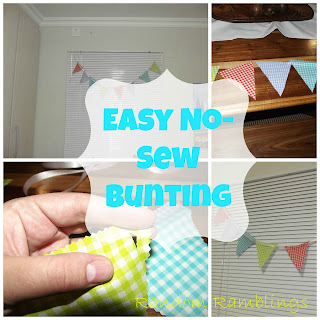 there are already MANY tutorials out there on how to make Bunting so this will be a short one.
You will need:
Material in your choice of colours/patterns
Pinking shears
Ribbon
ruler+ pencil or Template downloaded from online site of your choice.
I used an online template that I downloaded here from Chickabug.com
I traced it onto my fabric and cut it out with my pinking shears(sorry no picture of this). I cannot sew in a straight line so this was the easiest option for me as the fabric won't fray.
Once I had all my 'flags' cut I laid them out to see which order I wanted them to go in. 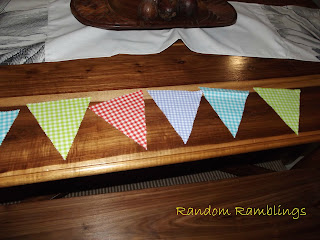 I snipped a small hole in each corner and thread a piece of ribbon long enough to reach across my window through the flags in the order I previously laid them out in. 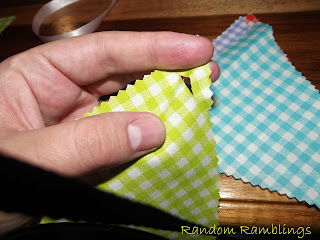 I then just tied the ribbon around the top part of the Blinds and Spaced the flags out . 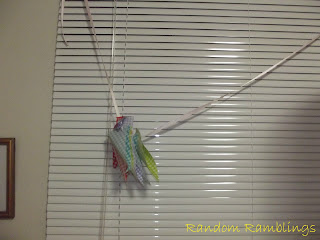 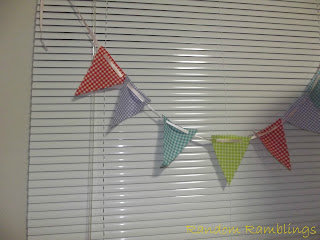 one tip I can give is to not make the hole you cut for the ribbon to big or your flags will slide down (gravity works against us). I did this with a couple but I think I might just go back with some fabric glue or a glue gun and dab some on so they stick where they meant too :) 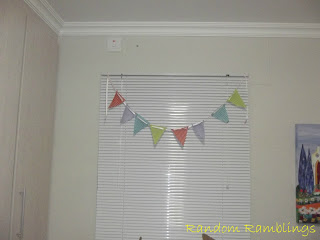 I love the way it turned out and it probably only took about 20 minutes to do, start to finish!
Next up I want to try sew a crib skirt and a changing pad cover. Wish me luck :)

Apparently Baby is the size of a Chinese Cabbage (whatever that is? It looks like a cos Lettace to me:) ) 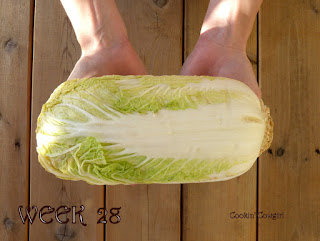 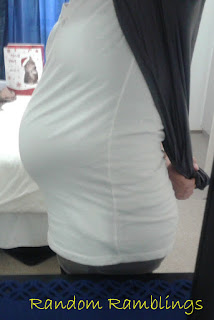 Sleep:has been horrible! the combination of growing bigger and sleeping in strange beds led to some rough nights. I was very glad to get home to my own bed. I also finally invested in a support pillow and its has made the WORLD of differance!
Best Moment of the Week: Coming Home :) I used to love travelling (and I still do) but it was wonderful to come home to my Hubby and familiar things.
Movement: If kicks are anything to grow by I'm growing a little Soccer star! they sometimes take my breath away
Symptoms: the usual :)
Food Cravings: I have been eating Top deck chocolate like its going out of fashion! very tasty but I'm sure not so great for my waistline.

What I Miss: a normal range of movement. I'm struggling to bend or move as quickly as I used to and for someone who is used to be able to do their own thing its a bit frustrating at times.
What I'm Looking Forward to:Getting back into rountine and starting anti-natel classes tomorrow! I'm hoping the classes will ease some of my worries:)
we're now in the third trimester so its all downhill from here!!
Yikes ;)

How Far Along: 26w 6 days
Size of Baby: Baby Should weigh about 850g and be about 33cm long
Baby sprinkle is about the size of a Lettace.
I'm growing huge so she's definately doing some growing in there!
Picture of Baby: 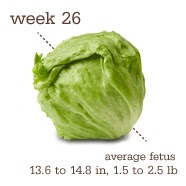 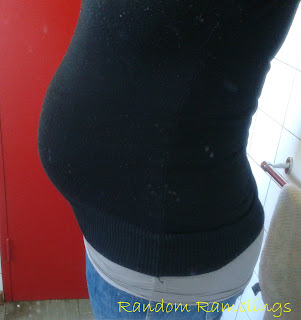 Sleep:the last couple days have been bad... I feel like a bit of a Zombie for most of the day

Best Moment of the Week: a Public Holiday gave us some much needed time to organise:) Managed to sort out most of the cupboards and Baby's Room is now almos clear of clutter
Movement: very regularly, especially after I eat
Symptoms: Pregnancy brain is still common. I've had some crazy mood swing this last week and seem to be a fountain as silly things make me cry...
Food Cravings: nope :)

What I Miss: being able to reach my feet without resorting to gymnastics..
What I'm Looking Forward to:the weekend! And hopefully getting our garden into a semi presentable state :)