Things that surprised me about pregnancy

At  39 weeks pregnant I feel that I can share a bit on the topic of pregnancy :)
There are many symptoms that really surprised me when I first experienced them only to discover(with a bit of research) they were actually pretty common. We all know about the obvious symptoms eg : morning sickness/cravings/big belly/some swelling but there are some strange things out there that I never knew about
Carpel Tunnel Syndrome:

This is apparently really common during pregnancy. Something about pregnancy hormones causes your nerves/joints to relax which means you can develop this pretty painful side effect. It makes your hands go dead or causes extreme pins and needles in your hands/wrists.Not helpful when one needs to type/write a lot and strangely very painful at night.
Body heat:

I am forever grateful that the last bit of my pregnancy has been in the winter ! I would have probably overheated otherwise . I feel like the human furnace

A very uncomfortable pain at the the top of my bump just under my ribs... its like a shooting pain every-time I sneeze or move in the wrong way and can be so painful it takes my breathe away...

For interests sake I asked some of my friends who recently became mom's to share their experiences too..
Krista: Mom to Klaire (almost 8 months old) 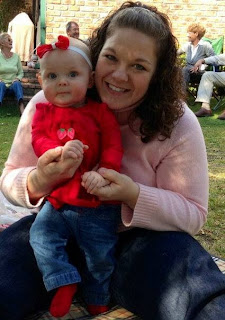 "I definitely had both fun and not-so-fun surprises during pregnancy.
• A couple fun ones… Whenever I would eat chocolate, Klaire would start to go crazy, bumping around in my belly… In my last trimester, Klaire often had the hiccups; but, without fail, she would always get them when I took a bath!
• A not-so-fun one… I expected most of the major discomforts that came along with pregnancy, but one that surprised me the most was the last two months of my pregnancy, I had awful pain in both hips when I would lay on my side (which is pretty much the only option by then!), so I got very little sleep. I couldn’t sleep for more than an hour at a time without waking up in excruciating pain. I’d roll over and sleep for an hour, only to wake up an hour later and repeat the whole process. "
Kerry: Mom to Luke (just over 3 months old) 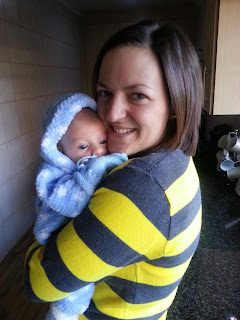 My most surprising symptom was extreme bloating. Other than that I had an awesome pregnancy! 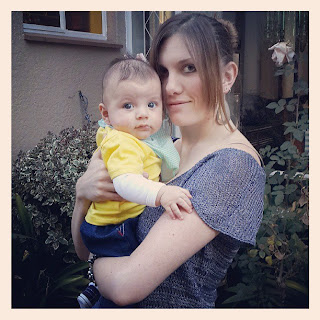 My most surprising symptom was my lack of symptoms!  I had a very positive pregnancy experience from beginning to end.  Of course I had my fair share of morning sickness – I don’t think anyone truly escapes that inconvenience – but I started taking Asic and it disappeared entirely!  Because of its antihistamine properties, acid reflux in later pregnancy was almost non-existent, so double bonus!!  All the usual pregnancy symptoms – aches and pains, mood swings, food cravings, lack of sleep – just never showed up!  Even the belly didn’t properly arrive until over half way through, so I had little to no use for maternity wear, which was exactly the opposite of what I expected!  Food-wise, I went off peanuts – the smell was enough to send me running for the bathroom! – and I found myself eating less meat and more fruit, vegetables and dairy, but there was nothing I had to have RIGHT NOW!  The closest I got to anything I expected was in my final two weeks of pregnancy.  Ricky was one VERY active baby and, due to the reduced amount of amniotic fluid, every kick and jab took my breath away.  I loved it though!  Being pregnant was some of the best fun I’ve ever had!